Future Priest to Serve Catholics in the Military 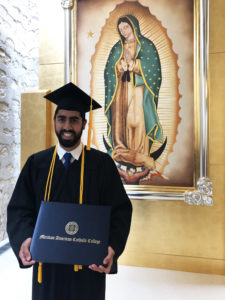 Before entering Assumption Seminary, David Chacko, a seminarian with the Archdiocese of San Antonio, graduated with honors from the United States Military Academy at West Point (USMA) in May of 2015 earning a Bachelor of Science in Electrical Engineering and commissioned into the U.S. Army Signal Corps, where he served as a junior officer for 15 months.

David, who grew up in San Antonio, is the second child of seven children – six boys and one girl – of Benjamin and Rosemary Chacko. His father was born in India and grew up in Kolkata. His family immigrated to the United States when he was eleven years old. David’s mother was born in Chicago and grew up in Little Rock, Arkansas.
“When I was in high school, I found my Catholic faith intellectually intriguing because I encountered a lot of questions from my friends on sports teams who had strong Protestant convictions,” he said. “Nevertheless, at that time my faith was all a matter of the head and not one of the heart. Near the end of high school, the Lord used the Christian witness of an older cousin and role model to convict me of not living my life according to the beliefs I professed.”

This began a conversion experience for him which awakened a desire to follow Christ and make Him the center of his life. While enrolled at West Point, David began to feel a strong calling to the vocation of priesthood.

“One day at mass during my first year, I experienced a profound attraction toward the idea of sharing the grace, joy and peace of Christ with others as priest,” he said. It took several years of deep discernment, when he answered the call and applied to enter Assumption Seminary. In the Fall semester of 2016, he became a first-year seminarian for the Archdiocese of San Antonio and began his Pre-Theology studies at MACC. He completed his studies this past Spring semester.

Graduates from USMA have an obligation to serve for five years on active duty. Therefore, the current plan is that after he is ordained to the priesthood, David will serve time in the U.S. Army as an active duty chaplain.

“After I’m ordained, I will spend three years in the archdiocese. Then with permission from Archbishop Gustavo, I will spend at least five years as an active duty chaplain in the army,” he said. “During that time I will be ‘on loan’ to the Archdiocese for the Military Services USA. After my chaplaincy time is complete, I will return to San Antonio for the remainder of my priestly ministry.”

“I really look forward to learning more about my faith, how to communicate its saving truths, and how to better serve the people of God as a future pastor of souls.”